Seasons change in the Midwest 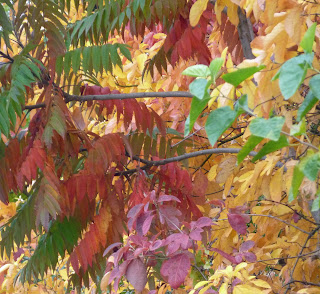 I hate the Midwestern winter with its subzero temperatures and glassy slick pavement. But I adore the changing seasons and this fall has been particularly lovely (or maybe I just forget the mind-numbing beauty of the leaves from year to year). In an attempt to document this transient splendor, I took some photos this morning, some of which are here along with a poem that seemed to fit. 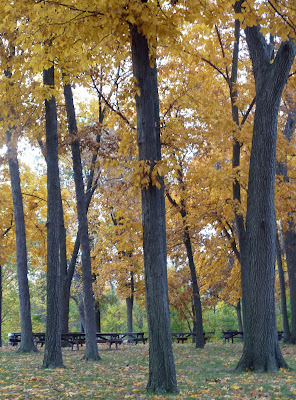 Every stained page is stressed
by a splat of color. Rough-red,
like an old tavern,

we become hungry birds
and prepare for fall.
Shape and shadow are candied citron

as lanterns turn bitter yellow. Autumn
is a red fox, a goblet filled with dark wine,
a hot chilli pepper with smoky eyes. 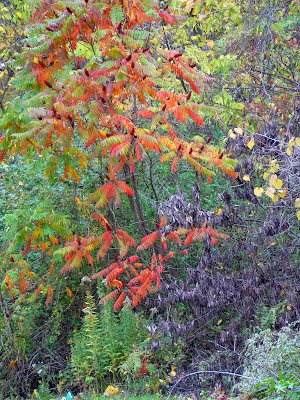 Pressed leaves take in the colors
of seafood paella and saffron; these leaves
are like death, climaxing with a smile.

Autumn: Her dress is a net of mussels;
dark shelled, it covers up
summer’s weatherbeaten body.

So pull out your boots
and stand on an aged, wood floor
like an evergreen. 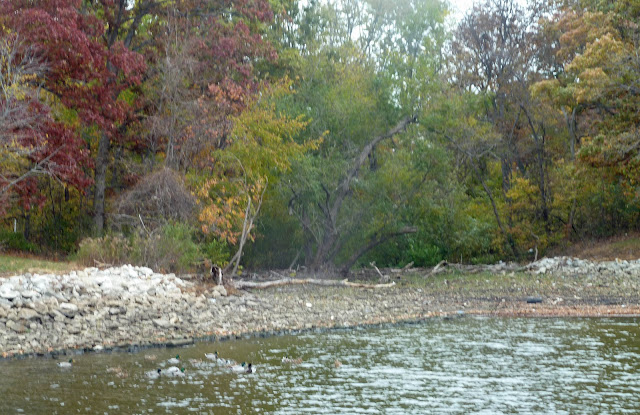 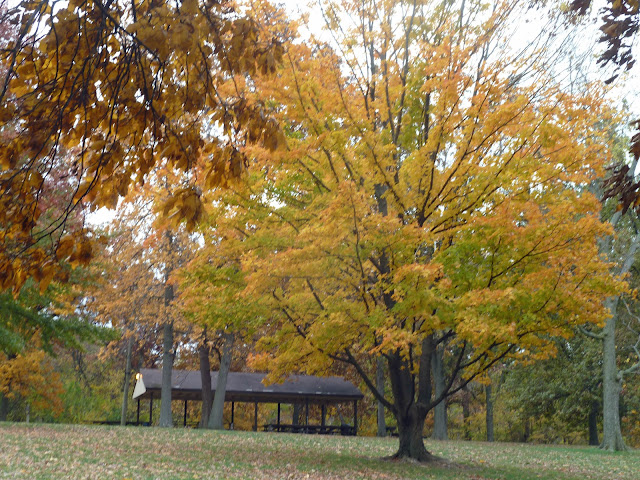 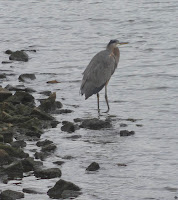 By the way, thanks everybody for the kind words and concern about my fall. The stitches came out Monday and my face is almost back to normal. It's amazing -- our human ability to heal!

A trip to Chicago and the aftermath

Last weekend we drove up to see Chelsea and Chris in Crystal Lake and attend a friend's daughter's wedding in Naperville on Sunday. It was a beautiful weekend and the further north we drove the more lovely the fall colors became.

After stopping for some much-needed refreshment at Chick-fil-A  (I don't know any other restaurant that offers carrot and raisin salad) we visited the newlywed's condo. They have fixed it up and it looks fantastic -- I guess that's what you get when you marry an architect. The only flaw was the sign next to the dumpster. No walkers, really?

We went to downtown Crystal Lake and walked around but it was really cold, something that didn't deter the Amy Grant fans who were beginning to assemble for a concert that she was going to put on later that evening. It was wonderful to see Chelsea looking so happy.

After attending the wedding on Sunday, we drove home. It wasn't until I was getting ready for bed that evening that things got interesting. I taken off my brace (my first mistake) and fell in the back bathroom, cutting myself on the shower. As I lay on the floor with blood flowing into my hair, I was thankful that a) I didn't appear to have broken anything and b) Ron was around. After a fruitless trip to an emergency department (we couldn't even get into a room), we came home to get a few hours of sleep.

Next morning, somewhat refreshed, we  went to a different emergency department, hoping for a better experience (wouldn't be hard). The wound had re-opened and blood started gushing out at the check-in. This seemed to make a big difference -- I was whisked into a room immediately. An army of nurses and the doctor attended to me quickly. It was just like on TV!

The rest of the week was less dramatic -- I nursed my five stitches and watched my face turn different colors. The wound doesn't hurt, but I have a feeling that small children may cry and run away after seeing me. I'm going to venture out though -- this place is driving me bananas!

The Evolution of My Face

I get the stitches out Monday and should be less colorful this time next week. A nasty end to a great weekend!
Posted by Melinda at 11:38 AM No comments: