When did "feminist" become an insult?

"You're just a feminist!" It's become an insult directed at mostly us middle-aged women when we get intractable or independent or even say something that doesn't jibe quite right. But it wasn't always that way.

Back in the 70s, during the dark ages when I was in college, feminism was at its peak. There were women burning bras and Ms. magazine was going strong -- the whole movement was very chic. It was fashionable to be a feminist -- those students who weren't were considered a little backward.

But in 1977, I graduated and entered the "real world." I landed a reporting job and had to immediately start working with men. Now, these men were, by and large, nice guys, but they were used to working with young women as secretaries, not professionals.They didn't know what to do with a dewy-eyed college grad who admired Tom Wolfe and Hunter S. Thompson.

The feminist movement aimed to change that attitude, either peacefully or, if that didn't work (and it seldom did), through radical actions. The radical feminists were out there doing the heavy work while the rest of us went to every day. Slowly, but surely, change happened.

Now, 30 years later, the word "feminist" conjures up visions of a strident old bat with no sense of humor. But I remember when the work world was much different (watch Mad Men if you want to see what it was like). Whether or not it is acknowledged, my two daughters are treated in a completely different manner and have much wider opportunities than we had in 1977.

Women have definitely influenced the workplace. From my vantage point, having spent years in management, most workplaces have become much more accommodating to families. That's important when over half of your workforce is women. When they aren't worried about children sitting home alone or missing doctors appointments or being late to work because one of the kids missed the bus, they function much better. It helps when you have been there and done that. You know what it's like.

These changes wouldn't have happened without the feminist movement. In my experience, people don't change their behavior without some benefit to themselves and the 1960s male-dominated workforce was functioning quite well, thank you very much. What it didn't foresee was that women were tired of being forced into roles they weren't suited to play.

Activists like Betty Friedan, Gloria Steinem, and Simone de Beauvoir pointed that out again and again and again, until, in spite of ourselves, we changed the way we thought about women. As a result, the 2011 work world is a better place for women. It's not perfect, but it's a hell of a lot better.

Call me a feminist. I'm proud of it.

An Opening at Gallery II

Last night we attended a gala event -- the opening of the Juried Associate Member Show at the Prairie Art Alliance's Gallery II.  Ron 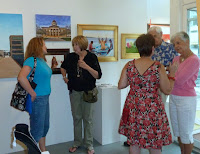 had two photos on display and we both were pretty excited about the evening.  And, even though Ron didn't sell any photos at the event, we had a great time.

When the show opened the two-room gallery was already packed with people -- a mixture of tattooed, long-haired artsy types; tourists with time on their hands after seeing the Abraham Lincoln Presidential Library and Museum, folks who appeared to have come only for the free food and wine, and twenty-somethings with young children in tow. It was an eclectic group, but everyone was in a good mood -- after all it was Friday.

The member art was in one room and was a (surprisingly) high-quality show consisting of photos, paintings,
jewelry and sculpture, most of it priced reasonably. I've always liked the idea of patronizing local artists -- it's so much more satisfying to have a beautiful original from a local artist than a mass-produced print from Bed, Bath and Beyond. Plus the piece often has a local tie-in, showing a landmark or vista from the Springfield area.

Ron's whole family (with the exception of one sister and her husband who had just left town the day before)
showed up to support him -- amazing! I took a couple of "rest stops" on a bench on the street outside the gallery when it got too hot and crowded, then ventured back to talk with some of the local artists.  Many of these creative men and women have day jobs and who pursuing their dreams on nights and weekends.  They inspire and encourage.